Using the complete plant profile during our extraction process we produce a full-spectrum oil, containing all the beneficial ingredients naturally found in hemp.

Our CBD oil is unflavored as it is mixed with MCT oil. The oil can be given directly to the dog or placed on its food.

This bottle will last approximately 100 days for dogs up to 25 lbs using recommended dosage once per day.

Start with a lower dosage and gradually increase to the recommended use.

The general recommended dosage is about 1mg of Full Spectrum Hemp Oil Extract per 10 pounds of dog weight.  Adjust up or down depending on results. itching dog. I hoped this would decrease my dog's itching but unfortunately it didn't.

We love using the CBD oil for the cats and small dog at TCHS shelter. It works so well and really helps the animals relax!

Our Jane is a puppy mill rescue. She has been terrified of things all her life - new people, the vet, strange noises, new things, etc. This CBD oil makes her more relaxed with less anxiety. Our vet can examine her better. She doesn’t submissively pee as much and she spends less of her day hiding. It’s been a lifesaver with less possible side effects a psychiatric drug would have. So far zero for her in the two years she has been on it. I wish we had found it sooner. 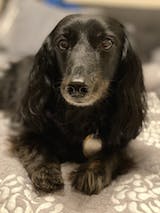 I have a very anxious rescue dog. He has responded to the cbd by having more confidence and being more relaxed. He is enjoying life much more. I'm so happy to have found something that really works. Even my friends and family comment on how much happier he is now. Thank you!

I'd never tried CBD oil (for my dogs or for myself) until a couple weeks ago. That's when I gave this product a try because it had been donated to New Rattitude through Max & Neo's donation program. My foster dog Robin underwent luxating patella surgery in January, and afterwards he stopped using that leg COMPLETELY, refused to even touch it to the floor. After a few weeks, the vet prescribed more time and more pain meds, but neither made any difference. A couple more weeks pass and I took him back again; this time they did xrays because they had no explanation for why he wasn't using the leg. That is when they discovered that his hip is out of joint on that leg, and the poor little guy needs FHO surgery! :-( So the surgery got scheduled for six weeks out and in the meantime they gave me MORE pain meds and told me to try to get him to use the leg because successful FHO surgery depends on the muscular over that hip being strong. A couple more weeks go by, with no noticeable improvement whatsoever. That is when I decided to give the CBD oil a try. My spouse and I were astounded when 36 hrs later Robin took a few steps on that leg. And the next day he was walking on it more than he was hopping. And within another day or two, he is at 98% use of that leg... and this is even before the FHO surgery! I realize that this could be total coincidence... but it doesn't seem so.

My Senior dachshund / beagle mix is 15 years old. He has sore joints and several painful tumors on his feet and his chest. I give him CBD 2x daily with his food. He walks around without pain and does a lot less licking. So glad this helps him. 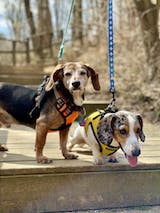